by trusted insight posted 10months ago 2085 views
Mansco Perry, III is the executive director and chief investment officer of the Minnesota State Board of Investment. He is an investment committee member of the Bush Foundation, a member on the board of directors of WCRA of Minnesota, and sat on the investment boards/committees of various institutions. Previously, he held CIO roles at Macalester College and Maryland State Retirement Agency. Perry holds a J.D. from Mitchell Hamline School of Law, an MBA from the University of Chicago and a bachelor's degree in history from Carleton College.

In this interview, he discussed how being a lawyer is a good foundation as an investor; how the organization deals with retaining investment talent; and why larger plans and investor peers are missing the boat when it comes to private markets.

Trusted Insight: Tell us about the Minnesota State Board of Investment and your role as executive director and chief investment officer.

Mansco Perry: The Minnesota State Board of Investment is the investment authority for the state of Minnesota. We've just passed the $100 billion thresholds of assets that we're responsible for. About 70 percent of those are public retirement assets. We manage the assets for three statewide retirement agencies for Minnesota, which is Teachers Retirement, Public Employees, and State Employees. In total, it's about $70 billion, but we're also responsible for several other statewide retirement, primarily a deferred compensation plan and a defined contribution plan.

We oversee the investments that fund a couple of statutorily mandated trust funds that are used by the state for various purposes. We also monitor the state cash account, which includes the general fund of the state. I like to tell people that we end up being kind of a checkbook for most state agencies.

"We started our private markets program in the early eighties, doing private equity since 1981. We’ve done real estate for about the same time, and also the resources program, focusing on oil and gas private market vehicles."


As executive director and chief investment officer, I oversee the staff and report to the State Board, made up of four constitutional officers. The governor is the chair of our board, and the other three members are the attorney general of the state, the state auditor and the secretary of state. We get advice from a 17-member investment advisory council. My staff and I present to the council before recommendations go to our Board. About 10 members of that council are members of the public and they're made up primarily of CIOs of local corporate, endowment, and foundation investment pools.

Trusted Insight: Can you discuss the strategic asset allocation strategy the organization has in place?

Mansco Perry: The main focus is the pension fund. We have an allocation of 53 percent to public equities. That is split into two thirds, one third between U.S. public equities and international. We do have a slight home country bias there. Our fixed income program is 20 percent, with 10 percent devoted to core fixed income. The other 10 percent is in the treasury portfolio. We have a 25 percent target to private markets and a 2 percent cash allocation. We have about 15 percent of the assets are invested in private markets, and the remaining 10 percent of that target to the extent that we haven't reached the target we allocate to public equities.

We started our private markets program in the early eighties, doing private equity since 1981. We’ve done real estate for about the same time, and also the resources program, focusing on oil and gas private market vehicles. We've been doing that since 1981. It's been one of our best performing asset classes, but we make commitments every quarter. The program has been pretty successful. I'd like to see us get closer to our target and potentially raise the target a little further.

Trusted Insight: What markets outside of the U.S. are you focused on investing more in?

Mansco Perry: We benchmark ourselves to the MSCI World ex U.S. for developed markets, the MSCI emerging markets platform on the public equity side. You'll see that the profile of our actual portfolio, is not too dissimilar from the makeup of the market. We're striving to be more globally diversified in private markets.

"Retaining talent can be difficult. Like others, we try to make sure that we're compensating people appropriately, and that's been something that we've been pretty fortunate to be able to do."


We've been investing in Europe in excess of a decade. In the last five years, we've been trying to get a little bit more Asian exposure so we have a little bit in some real estate funds that we've done that are Asia focused. We’ve made some toehold investments in Chinese private equity. We get some exposure in a lot of our global private equity mandates. I think that over the course of time, we will have a bit more exposure to China than we currently do. We're looking at the growth that's going to take place from the area. My personal belief is that that's going to be predominantly where economic growth will be taking place. China and India probably will outpace GDP growth, more so than the rest of the world. Hopefully, there'll be opportunities there. In the U.S., growth will be a little bit more of a challenge, but we definitely believe that we should be investing more in Asia.

Trusted Insight: How do you work with your governance structure to produce the best outcome?

Mansco Perry: Between us and the board is an investment advisory council. Given the composition of the members there, we've got some of the best talent available to help guide staff. That's been a pretty stable part of our structure for the last 40 years. The staff is primarily responsible for generating ideas and making recommendations by doing the manager selection and trying to develop strategy.

"Being a lawyer has given me a different sort of insight. The fact that I had a law degree was attractive when my boss initially hired me several decades ago."


The investment advisory council ensures that what we're doing makes sense. They'll challenge us as well with regard to what the ideas are. We think that that process makes a lot of sense. Then the IC will jointly make a presentation with me to our board for final approval. The board relies very heavily on the expertise of the investment advisory council to ensure that what we're doing makes sense and it's been a winning formula for us.

Given that we are an investment council, we're separate from the pension funds themselves. Most of the public pension funds, there's generally an investment committee of their board directors who provide a similar type of oversight. We think we're pretty fortunate with our set up, and that we're able to call upon several of our IC members. We're fortunate to have people from some of the prominent corporations, foundations and colleges in the area. The other members are the executive directors of the three pension organizations that I mentioned. There's a commissioner of management budget who's essentially the de facto treasurer of the state, who also sits on the IC. We look quite heavily to the members of the committee to give our team guidance.

Trusted Insight: Have you faced challenges in retaining investment talent at your organization? How do you tackle this industry-wide problem?

Mansco Perry: Well, we've been pretty fortunate in being able to attract, retain talent and to replace any turnover that we've had. We've actually had quite a few of our past alumni who've gone on to lead other investment organizations in the Twin Cities area. We're also able to call on them as well. Fortunately, we live in a metropolitan area where there is a vibrant investment community, and we’ve been able to attract some pretty good talent.

"We probably could stretch a little bit more in private markets and I think we're missing the boat by being as conservative as most plans generally are."


Retaining talent can be difficult. Like others, we try to make sure that we're compensating people appropriately, and that's been something that we've been pretty fortunate to be able to do. We are a part of the state government and that in itself has some challenges. We also have a relatively small staff. I'm hoping over the course of the next decade that will grow. We've generally had an investment staff of 10-12 people over the last couple of decades. Right now, we're in the process of developing how we should grow over the next decade.

Trusted Insight: You have a JD degree and a background in law. How does that background help inform your investment approach?

Mansco Perry: Being a lawyer has given me a different sort of insight. If you noticed, most investors rely very heavily on lawyers to enter into most of the contracts that we do. The fact that I had a law degree was attractive when my boss initially hired me several decades ago.

Personally, the insight that I got from my legal training has allowed me to maybe look at things a little bit differently than some of my other colleagues do. It also frustrates all my other colleagues. I've been accused by some in the past of being a little bit too lawyerly in my analysis. That combination provides a pretty good foundation for being an investor, primarily on the plan sponsor side of things. I think that we probably should have a few more people who have a joint background, but obviously I'm biased.

Trusted Insight: What topics or areas do you find most important these days? What would you add to the discussion?

Mansco Perry: You hit one of my favorite topics: private markets. It's an area that I think most of the larger plans should be taking more advantage of. We run operations that have very, very long horizons in most cases. We found that private markets give us slightly better returns than we see in public markets. I note that there continues to be a very high desire to have excessive amounts of liquidity. I think that large plans, in particular, should be taking greater advantage of the fact that they could probably have bigger allocations to private markets than we currently see with some. Of course, we have to manage our liquidity properly, because of growing concerns.

Our organization has about a $200 million net outflow we pay each month to participants. We do need to be very cognizant that we're able to meet those benefit payments. We probably could stretch a little bit more in private markets and I think we're missing the boat by being as conservative as most plans generally are.

The list of Top 30 Public Pension Chief Investment Officers can be found here. 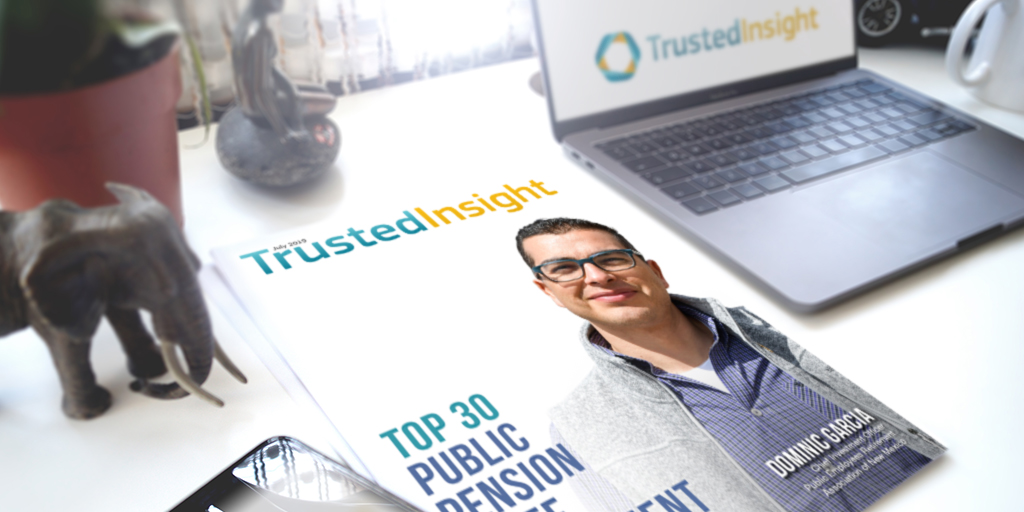