by trusted insight posted 3years ago 2133 views
Patrick Fleming is chief investment officer of the Wyoming State Treasurer’s Office, a sovereign wealth fund managing nine funds totaling $20.7 billion in assets. Since assuming the role, Fleming has worked with the state treasurer and legislature to overhaul statutes limiting the funds’ exposure to equities and alternatives to 55 percent. Recently, that cap was raised to a maximum exposure of 70 percent. Fleming is also working to build an investment team from scratch and manage much of the funds’ assets in house.

In this interview, Fleming discusses why he thinks we’re in the eighth inning of the bull market, why consolidation in asset management is imminent and how the Wyoming State Treasury is positioning itself in the near term.

Fleming was recently named on Trusted Insight's 2017 Top 30 Sovereign Wealth Fund Investors. He spoke with Trusted Insight on Nov. 20, 2017. The following interview has been edited and condensed.

Trusted Insight: Do you recognize the markets today? Is recognizing the markets even important toward formulating your long-term strategy?

Patrick Fleming: I spend 90 percent of my time in trying to recognize the markets. I'd say that this is a little bit similar to ‘07-’08, or '99-2000, maybe even ' 86-“87. Some of the things that were going on in '87, we're seeing today. Investors had portfolio insurance in '87, and today its risk parity and levered ETFs. But we are seeing a lot of similarities with each one of these timeframes. I spend a tremendous amount of time trying to understanding where the pressure points are and what is happening with the global markets.

For instance, one factor we're focusing on right now is China. China's a big deal. There's such a diverse opinion on what's happening in China. You have Jim Chanos and some of these other funds who are extremely negative on China’s debt. The state-owned enterprises are very levered. Other investors like Jim O'Neill, who coined the BRICS acronym, does not think it’s a big deal.

So you have these big divergent opinions from some very successful investors. I'm not smart enough to know which one is correct, but I do know that you look at the asset prices and you say, "Hey, 10-year Chinese yields are above 4% now. What's going on there? Short-term MLF rates are going up. They're clearly tapping on the brakes. How’s that going to impact the overall asset prices?"

You have to understand the fundamentals of those dynamics to know what asset class will outperform or underperform and why. That, to me, is all-important.

Trusted Insight: Are we on the verge of a major correction?

Patrick Fleming: I don't know about a major correction. I look at historical valuations. Whether you're looking at a Shiller CAPE ratio or a Tobin’s Q (market cap-to-GDP), all of these metrics that have the best long-term correlations to U.S. equity markets are at very high valuations.

When you're managing hedge fund money, you're looking at three-month or one-year returns. You're really focused on that short term. Here, we are looking long term, and it gives me the flexibility to sit there and say, "Okay, I’m really more concerned with the three-, five-, and 10-year returns." If you look at those time frames, the best correlation to the long-term returns would be some of those ratios I just alluded to, and all of them are saying that the long-term returns of these asset classes are going to be much lower than what we've historically enjoyed.

"You have the four major central banks of the world either flat or tightening policy. That's much more late-cycle, which would argue that we're toward the end of this very spectacular run, as opposed to the middle part."


If you're using a baseball analogy, I would say we're into at least the eighth inning. Let's call it the late-cycle phase, and late-cycle equity markets have a tendency to run. That's why we have been reluctant to move to a large underweight exposure, because equities have a history to run at this stage, and there's not much out there that would argue that you would see that turn around in the very near term.

In the last phase of the bull market, you typically see a more aggressive Federal Reserve, which we're are starting to see now. They are also starting to taper. We are going to see a reduction in the Fed's balance sheet. The ECB went from monthly purchases of 60 billion to 30 billion euros. Bank of Japan is somewhat flat. China, as I alluded to before, is tightening. You have the four major central banks of the world either flat or tightening policy. That's much more late-cycle, which would argue that we're toward the end of this very spectacular run, as opposed to the middle part.

Trusted Insight: You’re heavy cash right now. Other than that, how do you protect against getting washed out?

Patrick Fleming: Typically you would look at your hedge portfolio to do more of your risk mitigation. Options and option strategies are typically a wonderful instrument to use. But if you look at the skew in the S&P, the Skew Index is at a ridiculous 150.

Out-of-the-money puts are double the volume of the calls now. It’s crazy. Then you look at your secondary and tertiary trades. You can get volatility on other assets that are more correlated that don't have that skew. But your best hedge is always your primary asset, as opposed to the secondary or tertiary component. And yes, you can get a bit of a hedge on those less correlated trades, but it's not the same.

With our historical overweight fixed income weights, we do have the luxury of bonds helping a little bit, but with rates so low, there's no way we're going to have that protection like what's happened in previous years. If you remember back in the great financial crisis, five-years were trading at 5.25 percent. They went all the way down to 52 basis points in 2012. You had this very nice cushion on the fixed income side. We don't have that cushion now. Rates are so low. So the Fed can drop rates 100 basis points. Whoop dee doo. As opposed to 500 basis points in 07-08? Fixed income does not offer that type of a diversifier or hedge now.

You go through all of the different asset classes, and my conclusion is, one of the best and cheapest hedges right now is cash. With rates and the curve being so flat, by lightening up on your short-duration fixed income, you're not giving up hardly anything. We have raised cash by taking money out of some of the short-duration fixed income, and we lightened up in equities as they have run up. That, to me, is one of the more attractive components of cash. When you have two-year versus 10-year Treasuries at 63 basis points, it's not as much of a big give up in yield, and the curve continues to flatten with the short end underperforming.

Trusted Insight: The number and sophistication of institutional investment offices is increasing. These dollars, however, are chasing a finite number of investments. Is that an existential crisis for people sitting in your role?

Patrick Fleming: Spot on. Absolutely. Just look at the dry powder in private equity. What is dry powder up to $1.5 trillion? This is because you have so much more money now going into the asset class and only a finite number of attractive investments.

What does that tell you when you have more investors, more sophistication and more algorithmic models that are focusing on these things? To me, it tells you that returns are going to be muted. If you look at nominal yields over the last 50 years, a 60/40 portfolio returned about a 5 percent real. Going forward, most people are looking at more of about a 2.5 percent real, or 50 percent lower than what we were doing the last 50 years.

"The large, well-capitalized firms are going to be fine and able to ride it out. But the ones who are sitting in their 50th floor penthouse offices, who have mediocre returns, high fees and a very large cost of running their business, that's problematic."


In that environment, there's a lot of different components to focus on, but one of the bigger ones is fees. Fees, as a percentage of the total return, have gone up dramatically, right? You can only control the things that you can control. With the aspects that you can't control, why worry about them? I can't control the markets, but I can control the fees that I'm paying to the managers. If we're in a situation where the return that I'm receiving is the same as the fees that I'm paying, that's a problem.

Looking forward, I want to have my interests being aligned with the managers. When they outperform and they do well, they'll get paid. But just to earn fees for a beta return? Then no, that's not correct.

That's where you're going to see a lot of things change in my opinion. Many sovereign funds are working together, doing co-investments and they're doing partnerships. That's something that will continue and be more problematic for these institutions that have been getting high fees for beta performance. I think in the future, it’s going to be difficult for the funds that are not top quartile.

Trusted Insight: Does that spell the eventually death of two-and-20?

Patrick Fleming: Well, if you're Renaissance Technologies, no. Not at all. It's cheap. They can raise as much as they want at two-and-20.

You're seeing the bifurcation of the good and the bad. It's going to be very difficult for some of these small startups. Starting up in this environment would be very difficult. The large, well-capitalized firms are going to be fine and able to ride it out. But the ones who are sitting in their 50th floor penthouse offices, who have mediocre returns, high fees and a very large cost of running their business, that's problematic.

Trusted Insight: And that spells a consolidation of the industry, yes?

Patrick Fleming: Absolutely. But also a change in the business practice. It's both sides. You'll have to say, “Do we actually have to be Manhattan to do this? No, we don't have to have our whole office in that type of environment.”

That's why hedge funds are moving to Florida. Getting out of the high taxes and moving to a lower-cost structure. Back offices are moving out. It's not only on the asset management side, but also the operations of the funds. I would be shocked if a lot of these funds out there are not doing off sites and analyzing their management structure and seeing what changes are needed and what fee structure is optimal in this environment.

Trusted Insight: What else should readers know about you, the Wyoming Treasury or about sovereign wealth funds broadly?

Patrick Fleming: Overall, we beat our internal benchmark by 94 basis points, which was the best performance over a one-, three-, five- and 10-year period. For the first year that we've been actively managing the funds, our $2.5 billion internal fund was our best-performing fixed income fund. We beat the Bloomberg Intermediate Government Index by 187 basis points. That was very positive for our first year.

We're just at the beginning of what we want to do, but I'm pretty happy with the initial results. Hopefully in the next three to five years, we will be able to expand upon these results and do a better job for the people and the State of Wyoming.

You can view our full catalogue of interviews with institutional investors here. 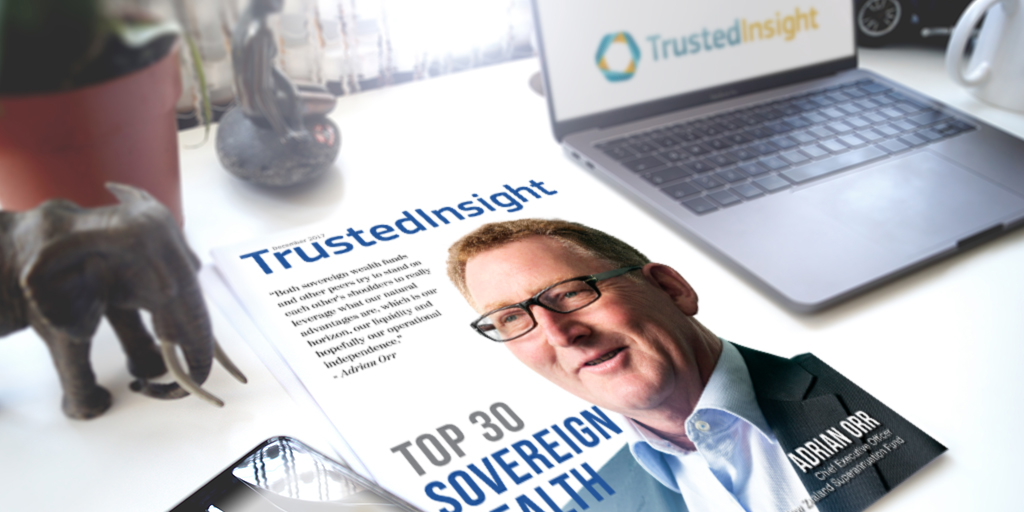