by trusted insight posted 1year ago 2636 views
James Herrington is a private and public equity investment officer at the West Virginia Investment Management Board (WVIMB), which he joined in 2008. He is also the chief executive officer and founder at Herrington Investment Solutions, a registered investment advisory firm.

In this interview, he discusses juggling both his roles at WVIMB and at his advisory firm; the WVIMB's very disciplined investment approach; and how they've been tackling the underfunded problem.

James Herrington was named on Trusted Insight's Top 30 Public Pension Institutional Investors. He is a private equity panelist at the Trusted Insight Summit 2019 on June 19-20th in San Francisco.

Trusted Insight: You are the CEO and Founder of an advisory firm since 2002, so how did you get started at the West Virginia Investment Management Board?

James Herrington: In 2008, the market was re-entering a downturn. That is when I noticed an ad for the West Virginia Investment Management Board, looking for someone to oversee their public equity managers and build out their new private equity program. At the time, I didn't know what private equity was all about.


"The WVIMB is generous and understanding. Fortunately, there is no conflict because my clients are fairly mid-sized ranging from $500,000 to $5 million dollars of AUM."


I recalled that my old boss had left his position for one in private equity, so I called and asked. He educated me and said I would be perfect for it. He then made a proactive reference call to the WVIMB’s CIO to tell her why I'd be great for the role, and from there the rest is history.

The WVIMB is generous and understanding. It allows me to continue to maintain existing relationships with my asset management business, most of which are located in California. Fortunately, there is no conflict because my clients are fairly mid-sized ranging from $500,000 to $5 million dollars of AUM. Most of them would not be eligible for any of the investments that West Virginia does and therefore no conflict of interest. I am fortunate in that respect and gratitude to the WVIMB.

Trusted Insight: We spoke with your CIO Craig Slaughter last year and he mentioned that the WVIMB tends to be a bit contrarian and that you try to be sensitive to the markets. Would you agree?

James Herrington: Yes, I agree. Not contrarian for the sake of doing the opposite of everyone else, but for the fact that we are willing to stick with what we believe is the best course of action over rolling 3-5-year periods. We concur that making too many changes in your investment philosophy tends to hurt results in the long run. For example, we have two public equity managers that are not hugging their underlying indices. The downside of that is over short time periods of one or two years, the managers’ results could be pretty far off the benchmark. Unfortunately, sometimes on the downside.


"A better goal is good risk-adjusted rates of return rather than just maximizing absolute return or doing what everybody else does thinking we are safe."


Since we are optimizing for 5-, 7- and 10-year time horizons, we find that we ultimately deliver a higher return and/or greater risk-adjusted rate of return. That's what ultimately makes West Virginia number one or frequently top decile among our peers when ranked by information ratio. A better goal is good risk-adjusted rates of return rather than just maximizing absolute return or doing what everybody else does thinking we are “safe”.

Trusted Insight: What was West Virginia’s best-performing asset class during fiscal 2018? Is West Virginia making a push into private equity since it seems to be a secular trend?

James Herrington: For fiscal 2018, private equity was the highest absolute rate of return. The best performing asset class relative to risk was international public equity. As to increasing the allocation to private equity, many others would be tempted to chase returns, but we feel there is more to it than that, namely balancing liquidity needs and risk tolerance. We are mainly investing in buyouts, at least two-thirds of our annual pace. Conversely, we have just 10 percent of our PE money in venture capital, even though it has the highest rates of return on average compared to the other sub-asset classes of private equity.

Trusted Insight: What investment verticals do you believe will give West Virginia a strategic advantage?

James Herrington: Private Equity and International Equity. The West Virginia IMB carved out 10 percent of eligible assets in 2008 to move into private equity, but we wanted to grow into the asset class over time. It has taken us over ten years to very carefully and selectively make our commitments. The strategy has not varied too much, and only now are those results bearing fruit. Since day one, we directed approximately 10 percent of the private equity allocation to venture cap. We also thought that roughly 80 percent would be allocated to North America or in the developed markets of Europe. It was five years ago that we carved out a 10 percent allocation to our definition of international. This includes non-U.S., non-Western Europe developed markets or relatively small funds in Europe where we could not otherwise take a large position ($40 million).


"West Virginia worked on solving its underfunded problem 20+ years ago by carving out a portion of the state's tax revenues to directly pay down the pension deficit over a 20-30-year period."


Across international equity, there are managers that provide long term fairly sustainable alpha. So, manager selection is key. That is harder to do in the United States, due to efficient markets. But in Emerging Markets, including China, there are still off-priced assets and other market anomalies that one can use to earn above index returns.

Trusted Insight: Public pensions are focused on attracting and retaining talent, given their ties to the government. What’s kept you grounded at West Virginia for over a decade?

James Herrington: Thanks for asking that question, because, it just so happens that The WVIMB is looking to grow its staff. We have a search that is currently underway but has not fully concluded.

To attract and retain people in a competitive market, we offer a work-life balance, flexibility and collegial atmosphere. I don’t worry about having unpleasant interactions with my peers in the office. It's a real joy to come to work. I have previously worked at firms where I earned nearly double (inflation-adjusted) what I make now, on an annual basis after bonus, but that was difficult work and long hours. We all have choices to make.

Trusted Insight: A clear trend within the public pension industry is to reduce investment return assumptions. Are there any strategies that West Virginia is implementing to aid the funding gap being faced by the industry?

James Herrington: There are a couple of things that can be done. Many of our peers are reducing their expected rates of return after quite a few years of up-market results. West Virginia was fairly conservative to start with, and so there has not been a huge push to reduce our expected rate of return.

We mentioned earlier in this article about increasing our investments in Private Equity, as a way to increase rates of return. However, I'm not sure how to do it without incurring additional risk. Risk (the good kind) is not such a bad thing unless you're really underfunded, in which case the lack of funds available to make disbursements can have other negative effects. Potentially one could encounter the problem of being short of money in a down market, and that leads to unpleasant ill-timed liquidations.

West Virginia worked on solving its underfunded problem 20+ years ago by carving out a portion of the state's tax revenues to directly pay down the pension deficit over a 20-30-year period.  A few years ago, when times were rough, some states asked: “What if we just didn't make the contributions, or what if we changed the rate at which we were reducing the shortfall?” West Virginia has been very disciplined and diligent about making the contributions necessary to fund retirements and to pay down the deficit. At that rate of progress, the underfunding could disappear in a few years.

James Herrington: As I lead for two asset classes, I could take lots of credit for our successes, but I want to convey how very much I appreciate the consultants we work with, on both manager selection and growing the plan as a whole. I would like to think that I am a hardworking and pretty smart guy, but I'm fully aware that the teams at our consultants working in tandem with the WVIMB staff do a lot better job than if I were trying to do this on my own. The group does not always agree 100 percent of the time when we work together. However, we probably agree 90 percent of the time, and debate the rest. I would like to thank them for the input, their hard work, and the way we collaborate.

The full list of Top 30 Public Pension Institutional Investors can be found here. 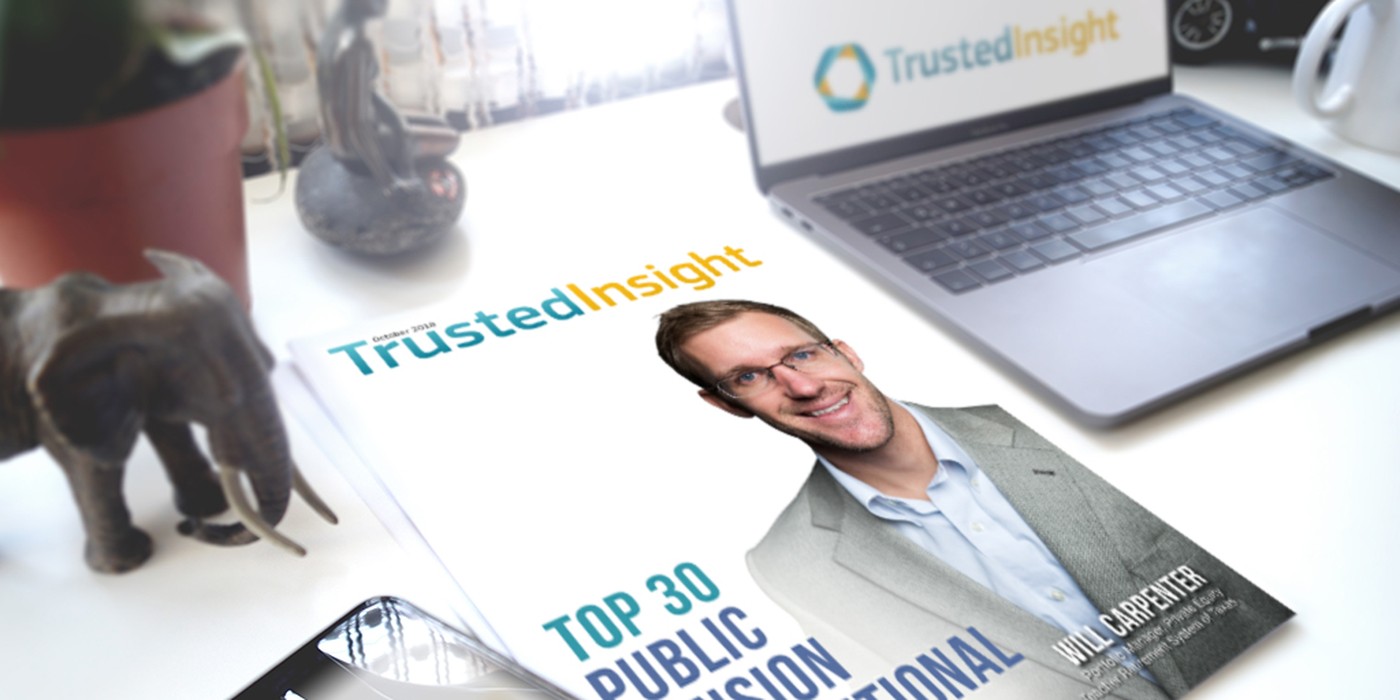