Craig Slaughter is the chief investment officer of the West Virginia Investment Management Board, the entity responsible for investing the state's defined benefit plans and Workers' Compensation Funds. He's been responsible for the state's investment portfolio since leaving the practice of law in 1989. In this interview, Slaughter discussed his transition from law to institutional investing; how his background influences his approach to the markets; and why he's suspicious of new ideas, but not afraid of them.

Slaughter was named on Trusted Insight's 2017 Top 30 Public Pension Chief Investment Officers. He graciously spoke with us on Sep. 26, 2017. The following interview has been edited for clarity.

Trusted Insight: You were a practicing attorney prior to taking the helm at West Virginia. To what degree has your law background been a helpful tool in your current role?

Craig Slaughter: What a law degree gives somebody is more of a training in thinking logically about problems and divorcing emotion from the construct. Frankly, that's in a large part why I went to law school in the first place. Its greatest contribution has really been a generalized ability to think about a wide array of problems and find a way to understand them.

Specifically, of course, a grounding in law is helpful as there's a legal component to every business deal. That's helpful to have.

Although most legal principles can be learned pretty quickly by logical people if they apply themselves. I've found that engineers often make great lawyers because they're extremely logical people, for example.

Trusted Insight: You've been responsible for the state's investment portfolio since 1989, approaching 30 years. In what ways have you seen your investment philosophy or approach to the markets evolve over time?

Craig Slaughter: Quite honestly, I was ignorant in 1989. And I knew I was. I didn't come to this role in 1989 to be an investment professional. I came because I was a lawyer. When I first started, I was chief of staff of the treasurer's office, which is where investments were managed back then. The state had an investment blow up, and there were a lot of legal aspects to that blow up. In other words, we were suing a lot of people and that sort of thing. That's how I came in. It was only afterwards that I decided I really liked this business. But even with the investment component, it has always been more of a management of people and processes exercise for me.

"The world is never the same. And I've had that view from the beginning. But I think a lot of the same principles about how the world works apply throughout time."

From an investment perspective, though I think I've grown quite a bit since then my understanding of the investment business. My approach, however, has always been to be long-term in perspective, to be suspicious of things in general -- suspicious of ideas, especially new ideas -- but not to be afraid of them.

The investment management board tends to be a little bit contrarian. Although, I hate to use the word “contrarian” because that implies something more than we are, and we aren't really quite that. But we try to be sensitive to markets.

Outside of that, we think the market is pretty smart, but we think it's possible for some people to do better, to be smarter than the market. We think we've found some of those people. We also think it is really hard to do. So, we're modest about our abilities to do that.

Trusted Insight: There doesn't seem to be a strong historical precedent that can guide investors, given the mix of monetary policy and regulation seen since the financial crisis. Do you recognize current markets? If not, how do maintain a long-term perspective?

Craig Slaughter: The world is never the same. And I've had that view from the beginning. But I think a lot of the same principles about how the world works apply throughout time. That allows me to think a little bit longer term. While the world as it is now is clearly different from what it was 10 years ago or 20 years ago or 30 or 40, the practical reality is people invest their money to make a return, to earn something. That's always going to be the case.

In general, equity is going to have the highest return. And I think the general relationship between asset classes will probably hold more or less true throughout time. It's just logical that it would. And if you're a long-term investor, you have to trust in that and embrace it knowing that there will be some periods that may be longer than you’re comfortable with where the relative relationships aren't what they will be for the long term.

"The best way to mess things up is to think that recent good performance means you are smarter than the next guy."

Part of the key to success is to build an organization that has the strength to have a longer-term view. Because that's part of the problem. If your stakeholders don't have confidence in you, they're not going to give you the latitude to survive through those periods when things don't work the way you expect them to work over the long term. To be able to have that latitude, you have to have a strong organization. You probably have some history that demonstrates to people that you are strong and that you're more than likely right. To me, that means when things go well, that's an opportunity to build good will. And you better guard it with your life, because you're going to need it at some point in the future.

Trusted Insight: If there's any one lesson that you've learned in your tenure in this position, what would that be?

Craig Slaughter: I have two. Know what you know and know what you don't know. And don't try to be more than you are. The best way to mess things up is to think that recent good performance means you are smarter than the next guy. That is one.

Two, remember that you are working for the people. Don't be afraid of 'em. Let 'em know what you're doing and explain it. Be transparent. Treat 'em like adults.


You can view our full catalogue of interviews with institutional investors here. 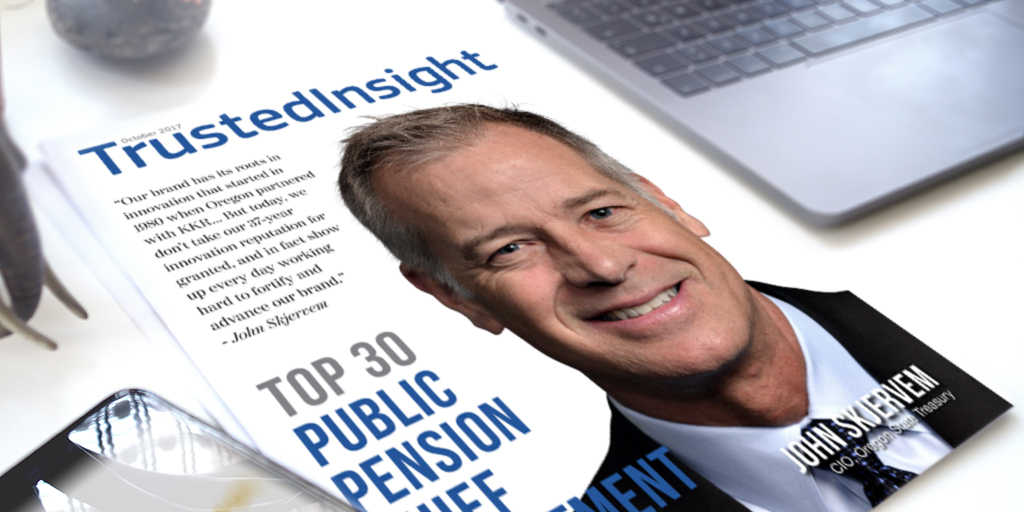